Why do we worship the great pumpkin at Halloween? Is it because of Charlie Brown? When we think of pumpkins do we just think of Halloween and nothing beyond?

As much as I love Charlie Brown, I’m going to fight back the imprint he has left on my mind as a child. I will say this. What draws me back to the pumpkin at Halloween is the thought of wielding a knife, cutting its top off and plunging my hand inside to pull out the brains. As my mind falls deep into thoughts of scary faces, with a medieval grin I plunge my knife in to carve my buck tooth pumpkin. I don’t know why I always made my pumpkins have buck teeth, but I did.

I usually got impatient with carving my pumpkin faces because I really just wanted to get to the fire part so that I could, with glee, admire my scary/buck tooth, smiley face great pumpkin. 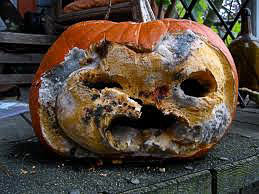 It’s really kind of a useless act, this carving the pumpkin thing. What a waste. I suppose you can call it a success if you can create penicillin.

I had no idea that the Irish brought us the carved pumpkin. Thanks Irish. Now I realize, like you, pumpkins don’t come from Ireland. Hundreds of years ago, Jack O’Lanterns were made out of turnips and potatoes. It wasn’t until the Irish immigrants came to America and were introduced to the pumpkin and a new Halloween tradition began.

To fully know the pumpkin we must know what it is.

A fruit is considered the edible plant structure of a mature ovary of a flowering plant, usually eaten raw. Personally, if you ask me if a pumpkin is a fruit or vegetable, I’ll just say “yes.”

The pumpkin is part of the squash family, Cucurbita pepo. But, let’s not give up here. Let’s dive deeper into the world of pumpkin-ism. 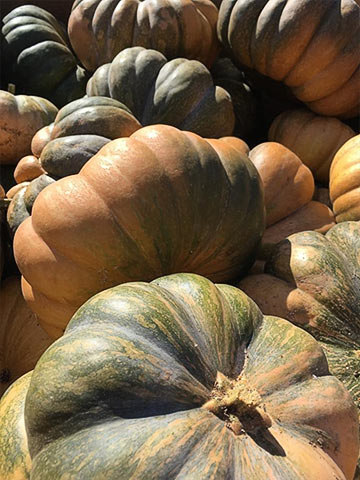 Let me introduce you to Musque de Provence. Oui, oui. This heirloom variety is the historic cheese pumpkin from the south of France. If you were around in 1895, you could have purchased the seeds from Vaughan’s Seed Store in Chicago. Weighing up to twenty pounds, it looks like a cheese wheel. In the United States we know them as Fairy Tale pumpkins.

In France, they’re cut into wedges and sold in farmers’ markets for cooking. Because of their long shelf life, they are most often used for decoration. Come to High-Hand and get one. They’re available. Slice one up. Bake one up. 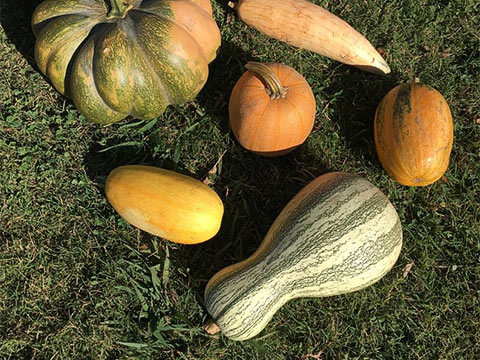 The skinny one next to Mr. Provence is a Northern Georgia Candy Roaster. Cherokee tribes loved this oddity for its ability to withstand winter frost and months of long storage. Bake it, fry it and make great pies with it. Roast it or stuff it. The Cherokee used the Three Sisters’ method of farming growing Candy Roaster and pole beans around the base of corn. This method kept moisture in the soil and kept the weeds down. Very smart, wouldn’t you say?

Pumpkin pie from a can? Are you kidding? Don’t be lazy. The round pumpkin in the middle is Winter Luxury Pie. Not Winter Luxury Canned Pumpkin Pie. It’s identified by the delicate white netting on the surface. Inside, it’s smooth, sweet and without fiber. It’s not the best keeper, so enjoy by Thanksgiving. Cooking hint: Cut the top off. Remove the seeds, put the top back on and pierce the outside with a fork. Kind of like poking holes in your baked potato so that it doesn’t blow up in your microwave. Bake it at 350 degrees for an hour-ish until you can poke a fork through the outer skin easily. Slice open, scoop out, puree, and whip out the secret family pumpkin pie recipe.

All of these and many more varieties are available at High-Hand. Freshly harvested this week from Maple Rock Farm, come get yours this weekend. 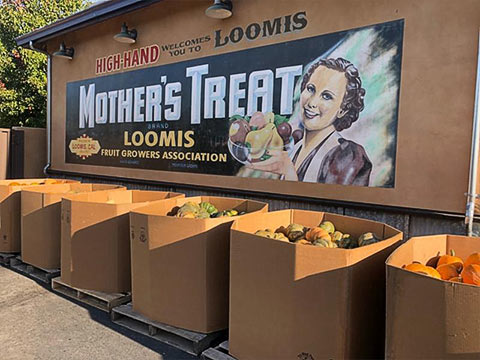 From a Cherokee Candy Roaster to a French delicacy and spaghetti squash, come to High-Hand Nursery for a fresh picked delight. Don’t forget Winter Luxury, the pumpkin of pumpkin pies and create a Mother’s treat this Thanksgiving. 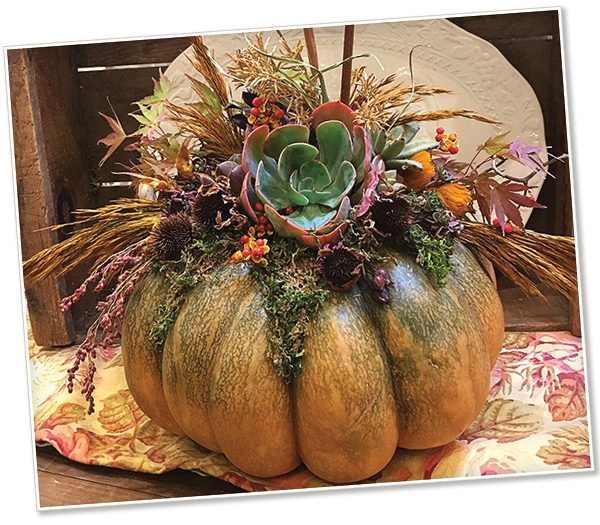 I wonder if the French thought we were going to do this to their esteemed Musque de Provence? Probably not, but that’s exactly what we did. We created a beautiful Thanksgiving centerpiece.

Saturday, November 10, 10-11:30 a.m, join Dory for our last Pumpkulent workshop of the year. We will supply you with all the dried and preserved floral ingredients, as well as succulents from our own greenhouse. Mimosas and fresh baked treats will most certainly be provided. This work shop’s cost is $65, plus tax. Reserve your seat and mimosa by clicking here. 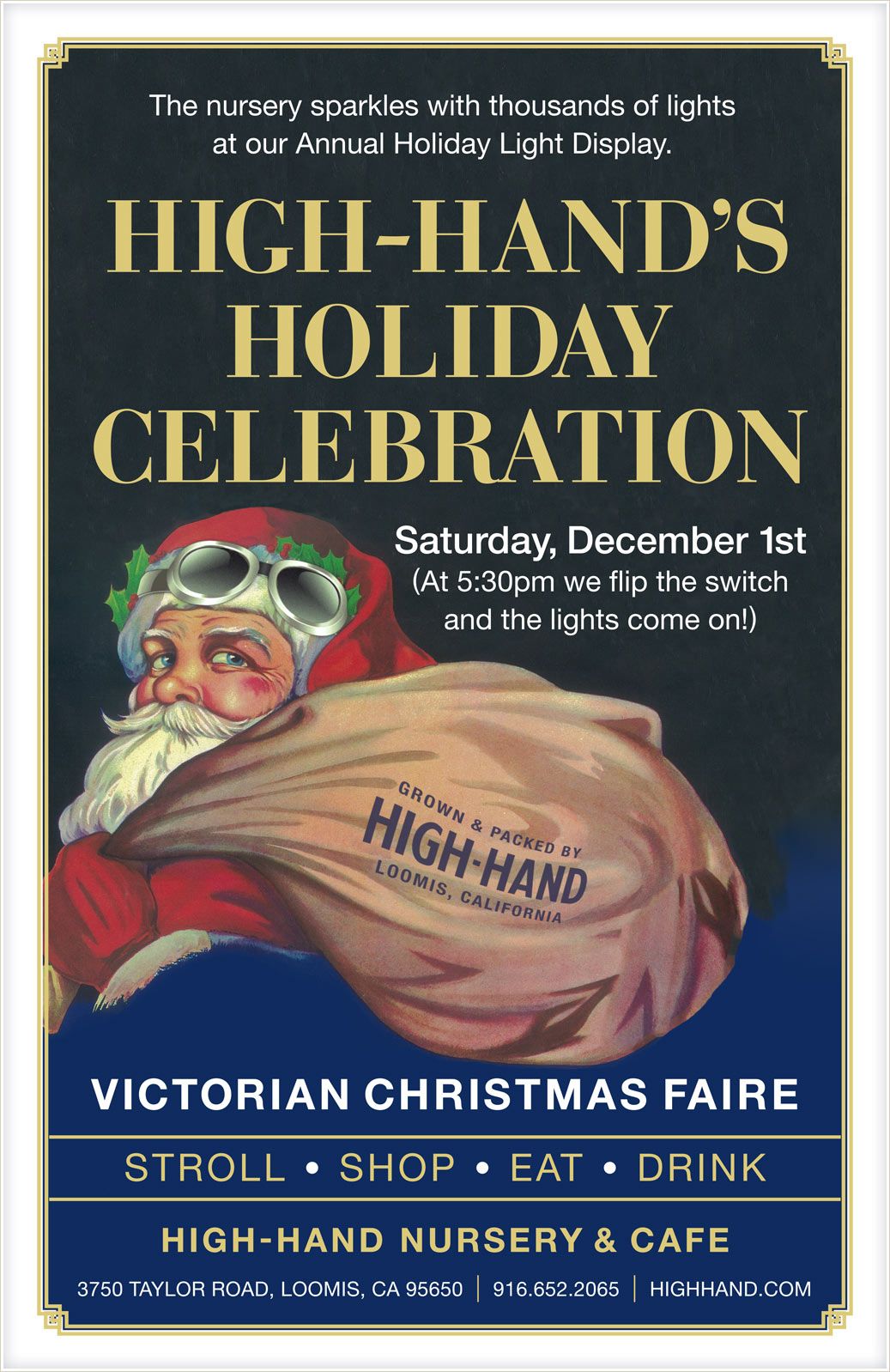 Join us Saturday, December 1st, 2018, for our Victorian Christmas Faire. Stroll, shop, eat, drink. We flip the switch precisely at 5:30 p.m, lighting up the entire nursery. Join us for this High-Hand tradition. 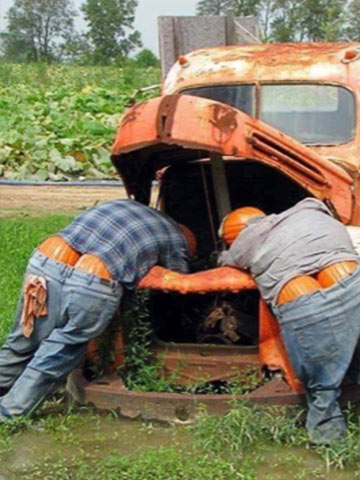