Before we get into attacking plants, here’s the rundown on this Saturday’s, July 15th Name Your Own Price Sale.

Here’s how it works. We have isolated a group of plants and trees that we would like to move out into a new home. Naming your own price does not mean you get it for that price. And I’ll tell you why. Two things happen. A person makes an offer and sometimes that offer is higher than what we had in our mind. So we will lower it. Fun, right? And unexpected. The second thing that happens is that a person will make an offer that is a bit too low and we’ll, in the spirit of fun negotiation, bump it up a bit. That’s not necessarily the norm, but let’s say the item was $100 normally and the offer was $10. We might ask for $15. It’s just the spirit of the deal. It’s certainly not meant to confuse. We want it to be fun and lighthearted. It’s really that simple.

Round Two | Name Your Own Price Sale

24″ box multi-trunk ‘Muskogee’ crape myrtle, 8-9′ tall $100.
In this instance, if you would like to offer me more, I would REALLY appreciate it. 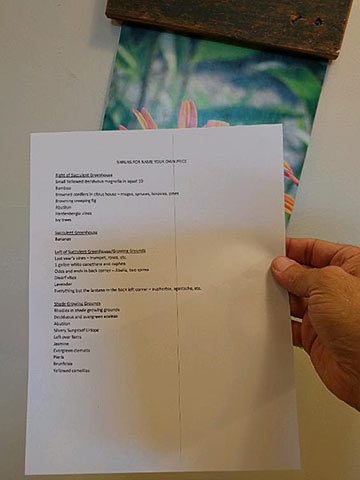 This is a partial list of shrubs. Sorry, too many to type. If you have the ability to blow it up and view it, don’t freak out about our internal wording. Saying “brown conifers in the citrus area” does not mean they are brown. It’s just an identifying word to us.

So, there you go. The Name Your Own Price Sale, this Saturday, 9-5.

Rules of Name Your Own Price Sale

I was thinking the other day about emails and the things I’ve talked about regarding the value of nature’s services and how root systems of plants are inter-connected. I was making an observation on our tomato plants at Maple Rock. This year, once again, has proven to be a little funky doodle when it comes to our tomatoes and WE’RE farmers. Our tomatoes were doing well and then when that week of 105 degree plus weather hit, it rained tomato blossoms. Fine. We’ll take a big breath. Stare at the tomato plants until new blossoms arrive.

But on a couple of plants I noticed caterpillars and I spied something curious. I noticed not poop on the leaves, but caterpillar juice. To put it bluntly, it was a half-eaten caterpillar and I thought if a bird had eaten it, there would be no carcass laying around. Who eats a half of a caterpillar and leaves it sitting on the plant? Doesn’t make sense.

So, the question I have, is it possible that a vegetarian caterpillar can become a cannibalistic caterpillar even when they’re crawling around on a salad bar? So, I looked into it. I don’t know all the answers. I just really have a lot of questions.

Is it possible that a tomato plant can taste so bad that the caterpillar turns on its buddy? Does a caterpillar become cannibalistic when the going gets rough? Is a plant rooted in place able to defend itself? A mouse can flee from a hawk because its little legs will make it run, but the plant is stuck.

In emails of the past we learned the interconnection that root systems have. A tree that knows it is dying can transfer its nutrients to another tree to help it survive. It’s kind of like the Avatar thing. Remember the Tree of Life?

So, here’s my real question. Can a plant that is under attack by insects warn other plants around it? Yes. Many plants can produce a defensive chemical that can deter their attackers. It’s kind of like a chemical screen. Airborne substances emitted by plants can be detected by other plants. In case they’re next on Mr. Caterpillar’s list, they can start the process of their own defense.

So, it’s kind of funny. Here’s what happens. It usually comes when the salad bar tastes nasty. It starts when one caterpillar bites another on the rear, which then oozes and everything hits the fan from there. At the end of the day somebody gets eaten. I think not only because the going got rough, but because war broke out. So, a plant nearby picked up the invasion, warned all the other plants, causing them to increase their defenses.

So, here’s Nature at its best, in all its perfect planning. The plant caused the caterpillars to become their own predators which is a victory for the plant.

Caterpillars are also coming out ahead, because they’re getting a lot of food by eating each other. Grizzly as it may seem, it’s just Nature doing what it does best. Transfer energy. It’s a win/win in a macabre way.

So, the next time you go out and pick your tomatoes, whisper at them. “I’m your friend. I come in peace.” Your tomatoes will surely be sweeter as they reward you for your kindness.

High-Hand is Changing | Step One: 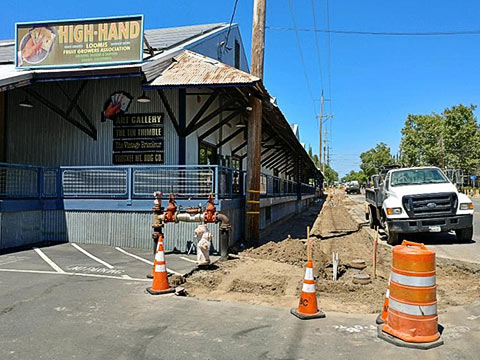 A new sidewalk and landscaping along High-Hand’s deck. I’m excited. It’s been a decade of improvements that continue on. 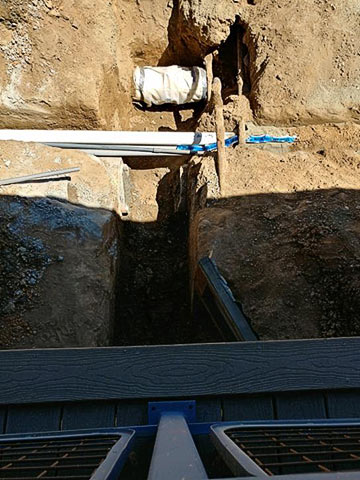 And, something that is near and dear to our hearts, especially when you’re in the plant business. A new water service for a one hundred year old packing shed. For all of you engineers out there, the corroded pipe to the middle right to the picture was our service that fed from the road. A new service will come from the white pipe and be super duper totally groovy new. Can you tell we’re excited? Keep an eye on us. More changes to come. 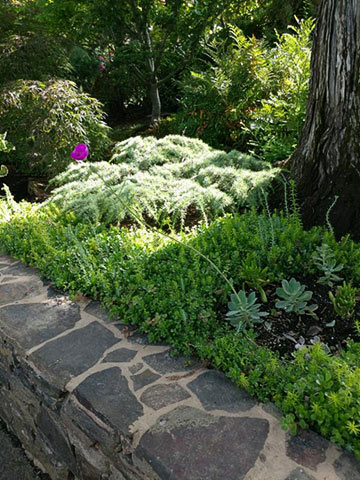 I chuckled at myself the other day when I realized I wasn’t seeing spots in front of my eyes. I’d walked by the wall several times and thought there were several spots floating. Three or four times this went on. Is there something wrong with me? So, I put myself to the test. The next time I walked by and saw a purple spot before my eyes, I turned quickly to see if the spot would dart away. It didn’t.

It was just a calandrina flower, on a 5′ stem hanging over the driveway. I kind of chuckled at the way this succulent was teasing me. It was like it was saying to me, “Hey! Notice me. I want to play.” Nature always reminds me to look carefully, see beyond what is to what can be and you’ll see a deeper world within your yard. And you might chuckle just like me, thinking to yourself that it’s been in front of your face the whole time. 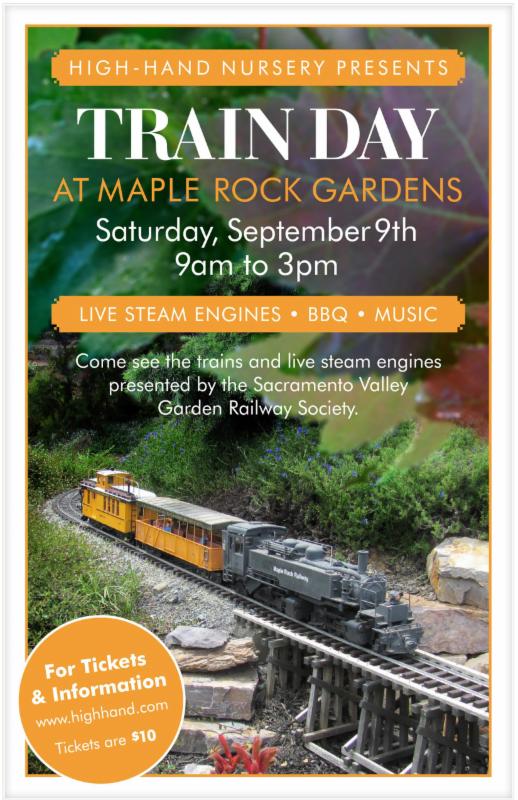 The trains are coming. I can feel them. Click here to purchase your tickets.